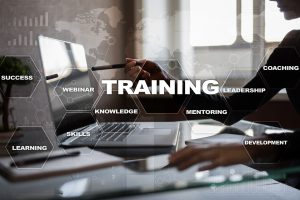 AUDIT              A formal examination of an organizations’ or individual’s accounts or financial situation. An audit may also include examination of compliance with applicable terms, laws, and regulations

CONTRACT     A mechanism for procurement of a product or service with specific obligations for both sponsor and recipient. Typically, a research topic and the methods for conducting the research are specified in detail by the sponsor, although some sponsors award contracts in response to unsolicited proposals

COOPERATIVE AGREEMENT
An award similar to a grant, but in which the sponsor’s staff may be actively involved in proposal preparation, and anticipates having substantial involvement in research activities once the award has been made.
Cooperative Research and Development Agreement (CRADA)

COPYRIGHTS   Protected works of authorship, such as writings, music, software, and works of art that have been tangibly expressed. The Library of Congress registers copyrights, which last for the life of the author plus 70 years.

COST REIMBURSEMENT
A contract/grant for which the sponsor reimburses the University for the Full Costs incurred in the conduct of the work up to an agreed-upon amount.

COST SHARING
A general term, used as a noun or adjective, that can describe virtually any type of arrangement where more than one party supports research, equipment acquisition, demonstration projects, programs, OR institutions.

DERIVITIVE WORK
Under copyright law, a work based upon one or more preexisting works, such as translation, musical arrangement, dramatization, fictionalization, motion picture version, sound recording, art reproduction, abridgment, condensation or any other form in which a work may be recast, transformed, or adapted. A work consisting of editorial revisions, annotations, elaborations or other modifications, which, as a whole, represent an original work of authorship, is a “derivative work.”

DIRECT COSTS
Clearly identifiable costs related to a specific project. General categories of direct costs include, but are not limited to, salaries and wages, fringe benefits, supplies, contractual services, travel and communication, equipment, and computer use.

FACILITIES AND ADMINISTRATIVE COSTS (F&A COSTS)
Costs that are incurred for common or joint objectives and, therefore, cannot be identified readily and specifically with a particular sponsored project, an instructional activity, or any other institutional activity. F&A costs are synonymous with Indirect Costs and are usually expressed as a percentage of the direct costs

FIXED PRICE    A contract/grant for which one party pays the other party a predetermined price, regardless of actual costs, for services rendered.

FOREGROUND INTELLECTUAL PROPERTY
All intellectual property owned by the University and rights therein resulting from a sponsored research agreement.

GIFTS               Awards given with few or no conditions specified. Gifts may be provided to establish an endowment or to provide direct support for existing programs. Frequently, gifts are used to support developing programs for which other funding is not available.

GRANT            A type of financial assistance awarded to an organization for the conduct of research or other program as specified in an approved proposal. A grant, as opposed to a cooperative agreement, is used whenever the awarding office anticipates no substantial programmatic involvement with the recipient during the performance of the activities.

INCREMENTAL FUNDING
A method of funding contracts that provides specific spending limits below the total estimated costs. These limits may be exceeded only at the contractor’s own risk. Each increment is, in essence, a funding action.

INDEFINITE DELIVERY, INDEFINITE QUANTITY (IDIQ)
Contract type also called a Master agreement, under which Task Orders are the mechanisms by which money is obligated.

INDIRECT COST RATE
The rate expressed as a percentage of a base amount established by negotiation with the cognizant federal agency on the basis of the institution’s projected costs for the year, and distributed as prescribed in the Uniform Guidance. Indirect costs are applied to salary and wages (S&W) or the modified total direct cost (MTDC) base. The indirect cost rate is charged on a set of direct costs known as an indirect cost base.

IN KIND CONTRIBUTIONS
Assistance in a form other than money. Equipment, materials, or services of recognized value that are offered in lieu of cash. Contributions must be documented in entirety to be used on an award.

INTELLECTUAL PROPERTY
Creations of the mind – creative works or ideas embodied in a form that can be shared or can enable others to recreate, emulate, or manufacture them. Can be any writing or discovery that is a new and useful process, machine, composition of matter, life form, article of manufacture, software, trademark, trade secret, copyrighted work, or tangible research property. There are four ways to protect intellectual property: patents, trademarks, copyrights, and trade secrets.

INVENTION     Any art or process (way of doing or making things), machine, manufacture, design, or composition of matter, or any new and useful improvement thereof, or any variety of plant, that is or may be patentable under the patent laws of the United States.

KEY PERSONNEL
The personnel considered to be of primary importance who contribute to the scientific development or execution of a project. The term usually applies to the senior members of the project staff.

MATERIAL TRANSFER AGREEMENT (MTA)
A contract that governs the transfer of tangible research materials between two organizations, when the recipient intends to use it for his or her own research purposes.

MODIFICATION
An award document that modifies any aspect of an existing award. Examples include carryover approvals, adding or deleting special terms and conditions, changes in funding levels (including NSF’s research experience for undergraduates, NIH’s minority supplement, DOD’s ASSERT programs), administrative changes initiated by the agency, extensions that include changes in terms, change of principal investigator, etc.

MODIFIED TOTAL DIRECT COSTS
The basic indirect costs are calculated on a subset of direct costs, normally excluding among other costs, equipment, patient care, space rental, alterations and renovations, and subaward costs in excess of the first $25,000.

NO COST EXTENSION
An extension of the period of performance beyond the expiration date, at no additional cost, to allow the principal investigator to finish a project.

NOTICE OF AWARD (NOA)
The legally binding document that serves as a notification to the recipient and others that a grant or cooperative agreement has been made, contains or references all terms of the award, and documents the obligation of funds.

PERIOD OF PERFORMANCE (POP)
The total time for which support of a project has been programmatically approved. A project period may consist of one or more budget periods.

PRIME AWARD
A governing agreement between the recipient and the awarding agency.

PRINCIPAL INVESTIGATOR (PI)
The individual responsible for the conduct of research or other activity described in a proposal for an award.

PROPOSAL      An application for funding that contains all information necessary to describe project plans, staff capabilities, and funds requested. Formal proposals are officially approved and submitted by the organization in the name of a principal investigator.

REQUEST FOR PROPOSAL (RFP) aka REQUEST FOR APPLICATION (RFA)
Announcements that specify a topic of research, methods to be used, product to be delivered, and appropriate applicants sought. Proposals submitted in response to RFPs generally result in the award of a contract. Notices of federal RFPs are published in the Commerce Business Daily.

REVISION        A modified and resubmitted request for funding for a project that was previously not funded either because it was denied by the sponsor or withdrawn by the principal investigator.

SCOPE /STATEMENT OF WORK (SOW)
The description of the work to be performed and completed on a research project.

SOLE SOURCE A situation in the marketplace where there is clearly and legitimately a single source of supply that meets the necessary requirements. A sole source justification implies that any attempt to obtain bids would result in only one option.

SPONSOR       The organization that funds a research project.

SUBCONTRACT, SUBGRANT, SUBAGREEMENT
A document written under the authority of and consistent with the terms and conditions of an award (a grant, contract or cooperative agreement) that transfers a portion of the research or substantive effort of the prime award to another institution or organization.

SUBJECT INVENTION
Any invention conceived or first reduced to practice in the University’s performance of work under a federal grant or contract.

TASK ORDER   A legally binding document authorizing work and appropriating funds as a supplement to a master agreement/IDIQ.

TRADE SECRET
The Uniform Trade Secrets Act defines trade secrets as information, including a formula, pattern, compilation, program, device, method, technique, or process, that derives independent economic value, actual or potential, from not being generally known to, and not being readily ascertainable by proper means by, other persons who can obtain economic value from its disclosure, and is the subject of efforts that are reasonable under the circumstance to maintain its secrecy.

UNIFORM GUIDANCE (UG)
Regulations codified in 2 CFR Part 200, et seq., published by the federal Office of Management and Budget (OMB) that establish the principles for determining the administrative requirements, cost principles, and audit requirements applicable to grants, contracts, and other government agreements.

WORK MADE FOR HIRE
Under copyright law, a work prepared by an employee within the scope of his or her employment; or a work specially ordered or commissioned for use as a contribution to a collective work, as a part of a motion picture or other audiovisual work, as a translation, as a supplementary work, as a compilation, as an instructional text, as a test, as answer material for a test, or as an atlas, if the parties expressly agree in a written instrument signed by them that the work shall be considered a work made for hire. JHU typically does not engage in work made for hire agreements, as they are in direct conflict with the University’s publication policy.